Vision Technologies and Discovery Communications have a strong relationship that has a global footprint and spans many years.  This type of world class customer satisfaction is one characteristic that set Vision apart.

For Discovery Communications, Vision designed and delivered a world-class cabling infrastructure for their 1 million square foot world headquarters building. The solution is based on a Category-6 cabling infrastructure for the horizontal cabling system for voice and data with an excess of 12,000 station cables, 3,500 strands of multimode fiber to the desktop, plus a like amount of broadband coax horizontal runs. In addition to the horizontal subsystem, Vision provided a voice-and-data riser system that consists of copper cables ranging from 300 to 600 pairs to each of the Telecommunications Rooms (TR), a Category-5e riser to each TR for video teleconferencing, plus a single- and multimode fiber optic cable riser system.

We also provided a trunk cable for the broadband CATV and MATV systems from each of the TR’s to the head-end location, as well as a complete wireless infrastructure using an optical fiber backbone and semi-rigid coax horizontal cabling, along with MobileAccess (formerly, Foxcom) electronics to provide converged wireless indoor networking for wireless voice and data connectivity throughout the entire building. This system enables pervasive 802.11x access as well as access to all major cellular carriers (including Verizon, Cingular, Nextel, among others). 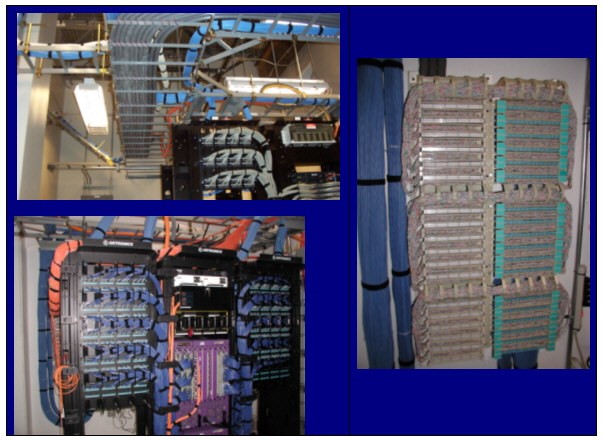 A major element of this project was the fast-track time line. From contract award/pulling the first cable, to the on-time completion, the project was delivered in approximately 5 months. Vision’s efficiency and rapid delivery helped enable Discovery Communications to maximize its operational capabilities in the fastest possible timeframe.